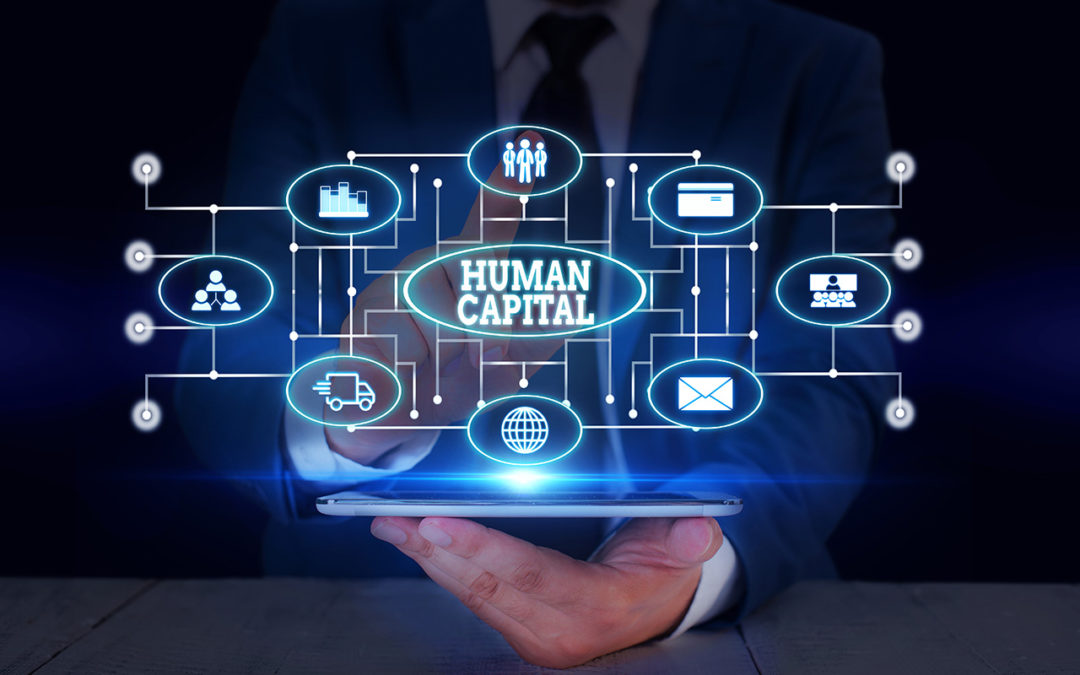 Human resources may sound too familiar, but human capital?  It’s not used as much. How does human capital differ from human resources?? Some people see this as a name change or upgrade; that both words refer to the same thing. But as you’ll see shortly, they don’t.

Nonetheless, both deal with people within an organization, particularly the workforce.  Let’s explore their core meanings as a way to differentiate the two.

Capital, as a word, has its roots in the economic world, where it refers to the assets a business requires so as to produce goods and deliver the services. It includes things like land, equipment, money, and people – the latter now known as human capital.

Human capital may sound like physical labor, but it’s way deeper than that; it’s an aggregate of things that contribute to the ability of an individual to do work in a way that promotes the economic value of an organization.

The Organization for Economic Cooperation and Development (OECD) defines it as follows:

“The knowledge, skills, abilities, competencies, and attributes embodied in individuals that facilitate the creation of personal, social and economic well-being.”

Human capital, as a concept, is credited to classical economists, notably Adam Smith, who brought exception to the thinking that saw workers merely as a collective mass.

Back then, provided one was willing and able to carry out the physical work, nothing else mattered – not even their little knowledge, skills, or competencies.

Even though it took some time to catch on, Smith’s idea that the individual capacity of each worker was some form of capital eventually made into the management world in the 1960s and has been evolving ever since.

Resource is a common word, but with varied definitions. Let’s work with the basic one, which puts it simply as an available supply that can be drawn on by an individual or organization when needed. The three most basic resources include land, labor, and capital.

To understand this further, let’s incorporate the business dictionary definition, which puts it as follows:

“An economic or productive factor required to accomplish an activity, or as a means to undertake an enterprise and achieve the desired outcome.”

Human resources can, therefore, be described as the people that operate/run an organization. There’s also the other definition of it as a function within an organization that focuses on people and issues that affect them such as hiring, compensation, benefits, performance, etc.

Clearly, there’s a thin line between human capital and human resource, which can only be visible when you consider the approach behind each.

If you choose to see your workforce as a resource, your approach will be limited to their transactional capabilities. You’ll align your worker’s capabilities with the job title and functions, but the problem with this approach is that you’ll miss a chance to explore other capabilities your employees possess that could transform your organization for the better.

It’s so unfortunate that this still takes place even now, as this piece on Marketplace confirmed.“Compliance cop” is how Glenn Llopis, an accomplished leadership training expert, terms this kind of HR role. Yet that’s not supposed to be the only thing HR does. He adds that HR should invest in employees by empowering those who want to evolve and help the organization grow.

Human capital management (HCM) and Human resource management (HRM) remain debatable concepts to date, and despite a lack of universal consensus on what each means, their foundational elements that we’ve just looked at play a big role in informing the differences.

HCM fits well into the definition that identifies it as an approach comprising a set of practices for managing, recruiting, optimizing, and developing an organization’s human resource.

Let’s face it, digital disruption and workforce trends – some very severe in their impact, are here with us, and there’s no sign they will stop. Think of the gig economy, changing demographics, remote working, complex legislations, and so on. Maneuvering this new space is a delicate undertaking whose success depends on how you react as a leader or HR person.

Being reactive has more potential of being a disastrous approach. But HCM seems better positioned to meet the demands of such a situation because it’s proactive in nature. It enhances the future value of employees, achieved through things like training, reimbursing educational expenses, higher wages, etc.

HRM, in its definition, incorporates elements of HCM. Inc.’s editorial describes it as formal systems developed for the purpose of managing people within an organization. Traditional HR roles that align with this definition include staffing, designing/assigning tasks, and handling worker’s compensation/benefits.

Some of the key areas of focus that HRM co-shares with HCM include employee retention, training, and learning, orientation, management, performance evaluation, etc.

Whereas HCM is a strategy/approach complete with practices systems and processes, HRM identifies as a formal function within an organization comprising systems, programs, and elements that help in managing people.

Whichever way you may want to approach this human capital management vs human resource management debate, the bottom line is that both concepts are about people in organizations.

Organizations that want to optimize their human capital and maximize its impact in helping them reach their goals and objectives would find HCM crucial to their efforts.